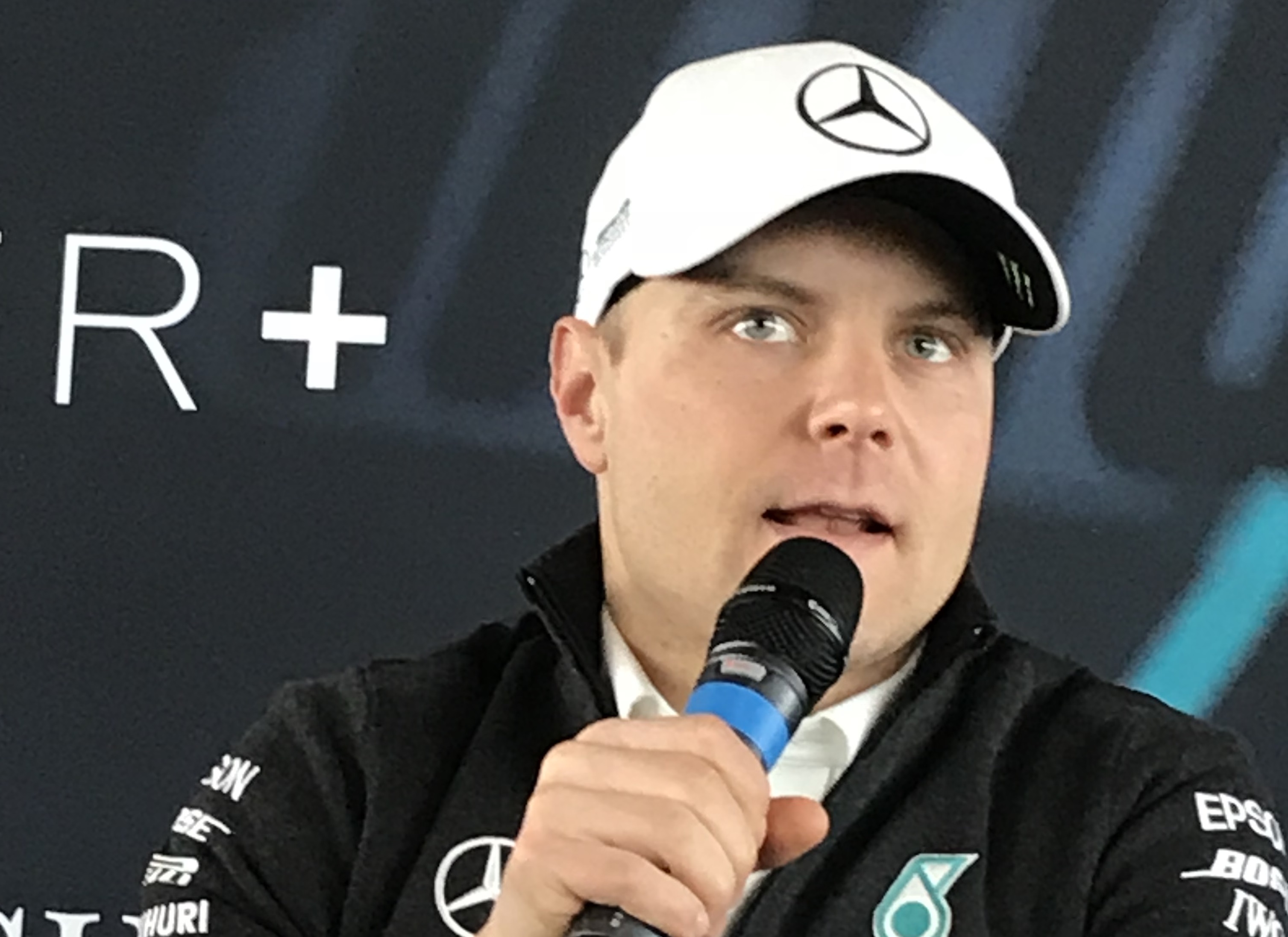 First to jump in to the cockpit of the new Mercedes challenger at Silverstone this week, Valtteri Bottas greeted the media to share his experiences of the W09, and also cheerily faced questions over the Halo, his contract negotiations and his team mate, Lewis Hamilton – can he challenge Lewis over the forthcoming season?

Badger GP’s Sarah Merritt was on hand to hear what he had to say.

On the new car – still a diva?

“It’s too early to say, but at least on those few laps I did, it wasn’t. The first three laps in these kind of conditions, with the wet tyres, it’s hard to draw any conclusions, but is was positive that everything was working well. Nothing felt strange, everything was working as it should, the car wasn’t doing anything funny, and it was responding to everything, so that’s a start.”

On having had more input into the W09, and being closer to Lewis over the season?

“I think personally for me, starting the second year with this team, it’s definitely my chance to start much better, to be performing on every single race weekend at the level that I should, unlike last year, where there were many race weekends when I wasn’t on the level that I should have been, and wanted to be. Alongside Lewis again, with everything I’ve learnt, it’s going to be an interesting season ahead. I feel I have a better chance this year than last year.”

On his contract discussions – around the summer break?

“I think that’s a good time. That’s always when you hope that you’ll know what the future will hold for you. I will go into the beginning of the year without thinking about any of that. I’ll be just thinking of performing on track and trying to make the most of our new car on every single race weekend.”

On what he has learnt from last year:

“Last year I learnt that I still had many things to be learnt! Going through the season, and now one year after, I learnt so much every race weekend, especially from the difficult ones, and being in a new team, in a new environment, new people around, there’s always many things you can learn. Different things on setting up the car, on driving the car, on certain tracks, certain conditions, tyre management…there’s so many details that I learnt last year, and those tricky races I had? I learnt so much from those, and how to avoid those kind of situations this year.”

And the psychological side?

“It’s like any sport, whichever event you have, or race, you need to be at your personal best mentally and physically. In Formula 1, the season is a bit like a marathon, so consistency is the key. I was lacking consistency last year and there were many races where I was performing below the level I was supposed to, and there was too much “up and down”, so I need to be more consistent. I need to keep my head together, and focus on the things that matter.”

“The advantage [this year] was that I could actually have a winter break this time, not like last year as it was a bit hectic, and when I signed with the team, there was a bit of a rush to get ready for a new season, but now, I have had plenty of time to reflect on everything from 2017, and to start thinking about 2018. I can be full of energy and well relaxed, and ready for the new challenges this year. We have so much feedback from racing together as a team from last season, so it’s going to be nice to go to almost every event knowing the good points and bad points of the previous year.”

On exiting the car with the Halo:

“It is more difficult, definitely. It takes a bit more time, but with practice, it definitely will get better. It’s okay. At least now it is the proper Halo, because previously we have been trying mock-up Halo’s and you can’t really lean on those or grab those, so this one is strong enough for you to grab it and get out of the car.”

On running with the Halo:

“You can spot the difference and once you are happy there, and you are running it all the time, it’s fixed. It is what it is, and for me, honestly, on those laps I did, it wasn’t causing any issues for me. I had no problems with visibility or anything like that.

On the teams expectations of his this year:

“I think last year, going into the season, there were more pressures than now. I still have targets ahead of me, and I’m really hungry for more wins and success, but definitely less pressure than last year.”

On having more input into the car design this year:

“Definitely the car has been designed differently in terms of the set-up window, because last year there were many cases where we had to make compromises on the set-up and it was quite difficult getting it in the right working range mechanically and even aerodynamically, and both things together. So hopefully we have a more complete package and it’s easier to set-up to different conditions and tracks. We’ll be focussing on a different kind of set-up work in Barcelona, trying big changes and seeing how the car is reacting, and also from my side, trying to discover what this car needs to be driven fast. It’s all about unlocking those small things when you’re driving, around the start, the lines, and so on, and to study and really focus on the fine details on how it handles and to be solving the problems quickly.”

On Lewis – is he beatable over 21 races?

“I think he is – I think he’s definitely the toughest team mate that I’ve ever had. He is one of the best drivers ever in Formula 1, he was the best driver last season, but also, there’s no driver that is unbeatable, that’s how I believe, and also, I believe in myself. I believe in all the things I have been learning since the 5 years now that I’ve been in Formula 1. I was able to show what I can do at many races, not during 21 races every time, but I know it’s there, I know it’s possible, so that’s my thinking.”

“It was very, very different conditions with the wind here last year, so I can’t compare much, but for sure, nothing felt worse with this car, so that’s a good start, and like I said, nothing felt strange.”

“I wasn’t going for the absolute qualifying lap today, because I heard what happened with Red Bull (he smiles). It was all about checking systems, everything works, and we’ll start to do some proper running in Barcelona and also as a driver, you start to explore a bit more about the car on its limits in Barcelona.”

On watching his team mate:

“I’ve found its always of benefit to be watching what your team mate is doing as well, and especially with Lewis as my team mate, I’d be stupid not to look in very much detail. There’s lots I’ve learnt from him, on certain things, at certain tracks that hopefully I can also use in the coming year. We’ll always keep watching elsewhere as well. I think in any sport that also can be the case and you shouldn’t miss that kind of opportunity.”

“Definitely, the very softest compound was quite fragile. It could take one or two hard laps, but then it was very fragile, even in Abu Dhabi, which is quite a smooth circuit, so its definitely not a tyre for all the tracks. We will see how it behaves on tracks like Monaco, for example – it can be good. Otherwise, honestly, there was no big difference in the compounds. I think the difference between each compound was a bit smaller than the previous year, but I don’t think we will see a dramatic changes in terms of the strategies. Maybe some places can be one stop more. I’m fine with the changes, I have no issue with that. I was an interesting time testing. You could definitely feel the  they were behaving a bit differently.”

On performing to keep his Mercedes seat:

“I think in Formula 1, in any season any case, if you don’t perform, then your seat is always in danger that’s how it goes in this sport, that’s a fact, especially in a seat like this. Over the last 3 years, it’s been the best two seats in Formula 1, so everyone wants to be there, that’s how it goes. I know the facts. I’m happy. I’m in the seat and the ball is in my hand. I need to make the most out of the year ahead and I’m confident that I can.”

On Toto saying he wanted more friction between his drivers:

“Of course, I’d like to put more pressure on Lewis on track, and like to be really battling with him a bit more often than last year. If I perform well then that’s going to be the case and naturally cause some tension that can be a positive thing when it makes both of us to try more to leave no stone unturned in terms of performance, and keeps us pushing a bit more. I think he means that he wants us both to be performing at one hundred percent, and that way, there can be some healthy competition.”

These are amazing. If you're looking for a Christmas gift, these are perfect. #FansLikeNoOther twitter.com/Sareyware/stat… Retweeted by Sarah Merritt