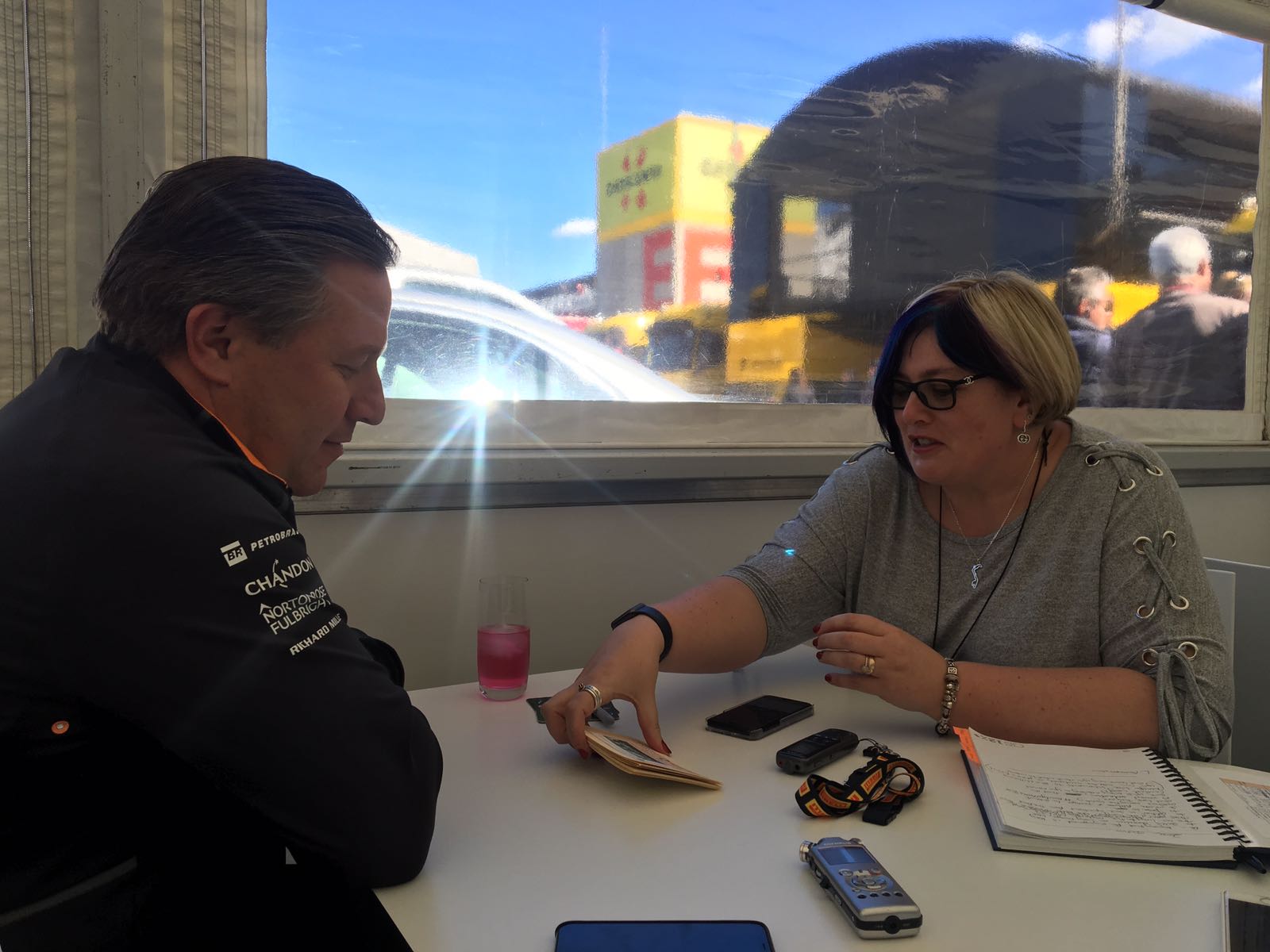 A couple of weeks ago, we reached out to you all via our Badger social media channels to find out what you would ask McLaren’s Zak Brown if you had the chance. Something about McLaren, perhaps, or a more personal question to Zak, knowing what a petrol head he is?

We know Zak loves to engage with fans on Twitter and has openly said that the livery of this year’s McLaren Formula 1 car is a response to huge numbers of fan requests to see a return to papaya, so this seemed right up his street!

We left it wide open to you all to send us whatever you wanted, and what a varied response we had! So, armed with a set of #BadgerAsksZak cards covering a range of the ones we received, we sent Sarah Merritt to testing in Barcelona to sit down with the man himself, and have some fun answering questions that are maybe a bit different to the normal ones he has to answer!

Sarah Merritt: So Zak, this first question is from Ben Dawson. He’s recently seen the Channel 5 programme Billionaire Kids that your son Maguire featured in, and the incredibly cool bespoke Scalextric set that you have.

Zak Brown: I had it built about eight years ago. It’s one of my favourite toys! It is made up of some of my favourite corners. So, it’s coming down the front straight at old Indianapolis, into the Riverside Esses, into the Nurburgring Carousel, into the Monaco hairpin, into the Long Beach Grand Prix hairpin, into La Source, up to Eau Rouge, down under the Le Mans Bridge and into turns three and four at Indianapolis. It’s the only place I drink and drive!

SM: Do you ever get any time to play on it?

ZB: No. It used to be at my house in Indianapolis and now it’s in my car storage unit, which I don’t get to often, so it doesn’t get the same amount of laps as it used to, but it’s good fun.

SM: Well, if you ever need anyone, Ben’s available, so I’m sure he’ll take you up on that one!

Next up, we have a question from Alex Brown.

ZB: McLaren has gone through different identities. Is the current team your McLaren, or a return to Bruce’s? Well, it’s not my McLaren. I don’t own McLaren, but it’s a new era.

Ownership has changed, and we’re very proud of our Bruce McLaren history. I think it’s a nod to Bruce and a nod to our fans because they’ve been asking us for years and we’re listening to them.

SM: Up next, one that I had to translate. Proving that we are international, we got this one in from one of our Spanish followers, and he asks when will we have a McLaren LMP1 car for Le Mans?

ZB: We are reviewing what other forms of motorsport we might contest in the future. We won Le Mans in the 90’s. We love Le Mans and the World Endurance Championship. The new rules are not out yet on the future LMP1, so we’re going to wait and see what those are, but it certainly in the consideration zone.

SM: I quite like this one, and I know what your answer is going to be, I think! Red Bull, Ferrari, Mercedes are considered the “Big Three”. How much would you like it to be the “Big Four”?

ZB: I’m good with the Big Three. I just want to change who’s in it!

SM: Yes, I could have predicted that when I read it. Next up – what’s your favourite cheese?

ZB: Quite a bit. You know, some of the technologies, but certainly the two brands are very lined up. People’s mindset within the factory is all about creating the best driving experience, whether that’s for Stoffel and Fernando to go and win races or for privileged people that have McLaren’s in their garage.

SM: I did notice you took Fernando for a drive around the circuit on the filming day recently, I think I watched it live on Sky Sports News, actually!

I like that now when you are doing filming days, and when you’re doing events, both sides of the company are coming together.

ZB: Yes. My favourite photo now is the 720S with our MCL33 and Fernando and Stoffel. I think that’s a cool photo.

SM: This next question is from Kevin, who is a car enthusiast and is rebuilding a Caterham F1 car in his garage! I really just thought I’d include this so we’re triggered off talking a little bit about your collection of cars. How many have you got? Do you get to drive them? I think I know the answer to that as you are so busy. Which is your favourite? And what would you want to buy next?

ZB: So, I’ve got a lot of cars! Race cars and road cars. Let’s break this into two categories.

With my road cars, my next one is going to be the BP23, which is the new three-seater McLaren, so that should be here in a couple of years. Then, I have to do it by era. I like my 1965 289 Cobra. I love my Porsche 959, I love all the cars. It’s kind of like asking which is your favourite kid!

Then race cars, it would have to be my 1991 Senna MP4/6 Monaco Championship winner. That’s as good as it gets.

SM: That’s not a car you’d consider driving is it?

ZB: I would test it, certainly not around London! I drive all my race cars. I mean, I don’t drive them often, but I make sure they’re all in running condition, and I’ve got one collecting criteria which are that each car had to have won a race in its period. If not, I won’t collect it, and then it goes on.

I like different types of cars and the drivers. All my Grand Prix cars, in particular, have all won races and were all driven by world champions.

SM: This next one is from the Italian McLaren fans, on sponsors.

ZB: I think McLaren is extremely attractive. We’re on our way back. We had the biggest car launch two years in a row, so from a visibility standpoint, everyone’s watching us.

We’ve got two great drivers, at different stages of their career, but one of the most famous in the world. We’re very flexible and user-friendly. We’ve had four new partners join us this year, which is more than any other team. So, like any stock, we’re a strong buy and we’re a better deal today than we will be tomorrow!

SM: That’s a great way of putting it! What would you say, expanding on that, to the guys that tweet me and other McLaren fans saying that car looks empty, and like it needs more on the sidepods?

ZB: I’d agree. It does need more, but it takes time. Four or five partners is good. We had a pretty blank car and we’re starting to fill it out. Our financial trajectory is that it’s going to take us three years to get, hopefully, to the situation where we’re sold out.

SM: For the races this year, will the sidepod space be filled with one of the existing sponsors, or something be put on them?

ZB: We’re thinking about how we deliver better value to our partners now, as we’ve got some space. We want to be consistent, and hope to fill it up with someone on a permanent basis, but, yeah, we’ll look to see how we can enhance value for our current partners.

SM: Next question. Do you know who Cosworth is?

ZB: I do because I sit on the board.

SM: No, a different Cosworth. (We show Zak the picture).

ZB: Oh, Cosworth in Tooned? Who was he?

SM: Cosworth is the parrot that sat on Ron Dennis – you never saw Ron’s head, but Cosworth sat with him, like a Bond-villain cat.

ZB: I know Tooned well, but I missed him.

SM: Well, the next question then, I guess – is there any time to bring Tooned back? We had a special with Fernando and Jenson at one point.

ZB: That was John Allert, our Chief Marketing Officer – his brainchild. We like it, we love it. I think it’ll be back in the future. There are no specific plans yet, but it was clever and everyone enjoyed it, so when the time is right, we’ll Toon-in next.

SM: It was good because it was at a time when Ron was around, it was the first thing that made it look like McLaren was fun and a bit more open.

Right, next one, from Mark.

ZB: Yes. I think the team can win a championship with a customer engine. It’s hard for any team to win the championship without an enormous amount of money, which the top two teams currently have, so it’s out of balance.

SM: Next up, from Nickie. We all know the last couple of years have been tough, and she asks about overcoming that.

ZB: I think the team has worked unbelievably well as a team. When you’ve got challenges like we’ve had the last three years, a company less strong than McLaren, that can tear apart a company.

All we’ve done is taken our frustration and put it towards a desire to be even better, so in some strange ways, it’s been healthy for the organisation and everyone’s stepped up.

We’ve had very little churn in the company, and that frustration’s been channelled in a very positive way.

SM: Do you try and book a period of time off as a holiday, or are you always working?

ZB: I’m pretty much always working, but I try and book them around the kids’ holidays.

SM: Last question and this is from Ana. She is in Mexico and she’s a McLaren fan.

ZB: Good question. We like to be one step ahead of everyone else on the track and in fan engagement. Our communication team, our digital team, our drivers, the access we did on Amazon – all this shows how much we are listening to the fans.

Our social media engagement is either number one or two and what we want to do is, as the technology in the sport opens up, be the leader in letting the McLaren fans into Formula 1 and our world, like with Amazon. So, more of that and what’s next is… stay tuned!

Many thanks to McLaren and Zak for their time answering the questions that we received.

Guys check this out. Her stuff is amazing. The quality and look 💯 twitter.com/Sareyware/stat… Retweeted by Sarah Merritt

Oh my lord Diana! Flat as a pancake! #Glastonbury2022

He’s done it again! @maxchilton has just broken the Timed Shootout and his outright record in the McMurtry Spéirling. The VW ID.R has been beaten with a ridiculous time of 39.081 seconds. The Future of Motorsport Power presented by @dhlexpressuk #gw_DHL #FOS #Hillclimb #record pic.twitter.com/5Lr2ODJzrt Retweeted by Sarah Merritt

Hakkinen takes the McLaren MP4/5B for a stroll up the Hill #FOS pic.twitter.com/YOVnlQBgm6 Retweeted by Sarah Merritt