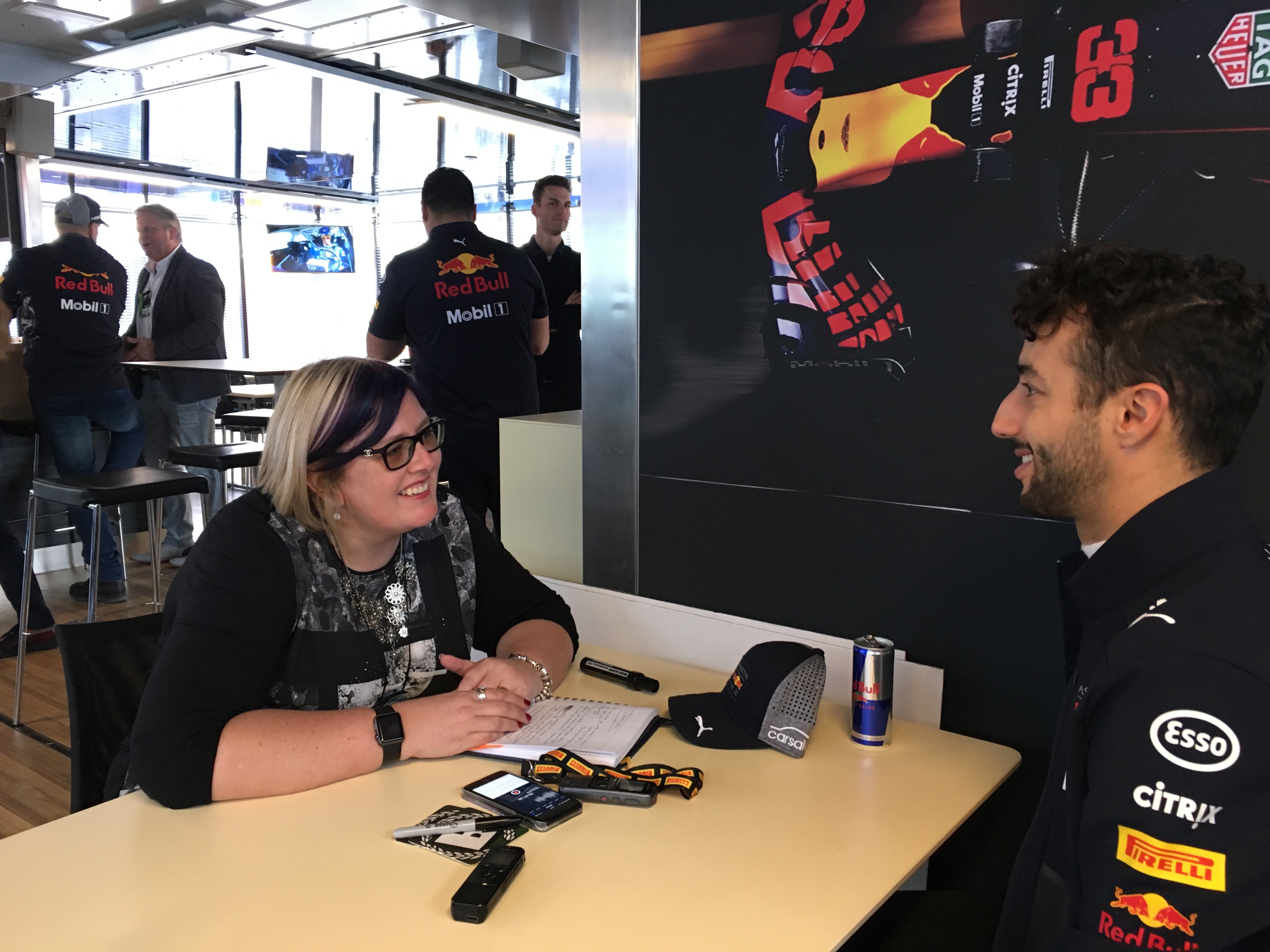 There’s nothing at winter testing in Barcelona that is guaranteed to put a smile on your face more than ten minutes chatting to Daniel Ricciardo down at Red Bull.

Despite having been ill at the start of the second week, and having to swap driving days with his teammate, Badger’s Sarah Merritt caught up with a playful and confident Danny Ric, and quizzed him about his winter break, having caught up with a certain Mr Button, the test so far and positive hopes for 2018, and a personal request regarding a photogenic Aussie marsupial from near his hometown.

Sarah Merritt: How was your winter break? Did you get up to anything good?

Daniel Ricciardo: It was good, I did a lot of Australian things; I was fishing, riding bikes, just doing boy things. It was fun, it was good, and it was hot, so coming back here sucked! I don’t like the winter. I’ve been sick like all the last week, and it’s just the cold weather. My body can’t handle it!

SM: I saw you went karting with Jenson?

DR: Yes. It was quite funny, I was in LA, I did a bit of my break there, and he messaged saying, “I’m doing something for my birthday next weekend” and he goes “I know you’re in LA”. I was like “cool, yeah, I’ll be around” and then he goes “oh, we’re going karting” and I went…all right. I thought you would have wanted to do something different! I think he misses racing.

New episode on JB TV is now live! Check out what I got up to on my birthday weekend in the mountains and karting with an appearance from @danielricciardo. https://t.co/hO4iR5xfwh don’t forget to Like and Subscribe!

SM: That’s what I was going to say, you have to remember he doesn’t drive anymore! Well, he does Super GT, but not F1.

DR: I thought he’d be bored of it by now, but no, he still loves it.

SM: It’s good for you to catch up because you don’t get to see him here now.

DR: Yes, and he’s always good value. Since the early days, when I got into F1, he was just always really nice to me and never had an ego or anything. He was just treating the top guys how he treated the new guys and that was cool, and we get along.

DR: It definitely had some highs. It was a bit of a roller coaster. What was looking like a pretty poor season, then turned into five podiums in a row, and that was unexpected. Then a few more podiums along the way, then some weird weekends when we were just kind of nowhere, like Mexico – fastest in practice and then we lost for the rest of the weekend.

It was hit and miss, but still more positive than not and I feel I learned a lot from it. As long as you’re learning, you’re always getting better. So 2018, I’m feeling refreshed – I will feel refreshed – and I’m excited.

SM: That’s good to hear you’re excited about it. I was thinking that there was a lot urban legend going around last year about the ’13’ on the RB13 being a bit unlucky and that there was talk in the media of changing it. Did the name ever bother you at all or was that just silly superstition?

SM: None of that had anything to do with the name, that was about what you did on track!

SM: Fans loved the RB14 livery that we saw you run at Silverstone. What did you think about that? Should they have kept it for testing?

DR: I thought it was cool. I love our race car so I’m happy with my race car for the season. They could have kept testing I guess, but come racing, I like our normal colours.

SM: And that’s an area of the world where Formula 1 isn’t right now, so it would be great for them.

DR: Exactly. So it would be cool. For the market, as well, it would be interesting. Yeah, let’s start with those two!

SM: Let’s talk about the Halo. What do you think the visibility’s like for you personally? I know you were driving in the rain the other day, did the spray affect you?

DR: I personally didn’t notice that, but I wasn’t following other cars. Maybe if you follow other cars you won’t, and in the dry, it’s been fine. I know that it looks ugly but as far as visibility, it’s fine. I know for fans, not only is it ugly but spotting the helmets is hard. That’s very difficult. Maybe we could put something on the halo which can symbolise that’s Max and that’s me. It is hard to tell drivers at the moment.

SM: Can you see the start lights okay when you’ve been doing these practice starts?

SM: Sum up how the testing has gone so far? You’re feeling positive for 2018, but is it looking good?

DR: It’s looking good. The days I’ve driven the car, it’s been strong. Reliability has been good. It’s been our best test since I’ve been with the team, so we can only take that as a positive.

SM: That’s a really good thing to take away. Are you looking forward to Melbourne now? I guess you’re hopeful of giving those fans back home something to remember?

DR: I’m hopeful of just starting the race this year! I just want to be on the grid! I missed the national anthem last year as well, as I was in the pits, so yes, I’m definitely confident we’ll have a good weekend. I’m obviously still looking for that podium from 2014, so that’s obviously always my intention.

SM: What targets have you set yourself for the year ahead? Have you been kind to yourself?

DR: Obviously I want to win as much as possible, but even the years we’ve won races, we’ve never been in the hunt for a title. I just want to be there at the end. To have a chance to fight for my first world title, that’s really what I want. If I’m in that position then I believe I’ll capture it.

SM: One last question from me. I’ve got a bit of an obsession with Quokkas. I love seeing photos of them and they are the happiest little animal. If you google “Quokka Selfie”, there are hundreds of them with celebrities, and I think you need to go there and have a selfie with one!

DR: With a Quokka? There’s plenty in Rottnest! It’s a bit of a thing. The UFC was in Perth a few weeks ago and I know one of them, the main fighter. He did a selfie with a Quokka.

SM: I think this is the thing that’s missing from your Instagram, Twitter, Facebook. It’s got to be done! The smiliest animal with the smiliest driver.

DR: Okay. Would a kangaroo work?

SM: Okay, I’d prefer a Quokka though. Keep me posted!

These are amazing. If you're looking for a Christmas gift, these are perfect. #FansLikeNoOther twitter.com/Sareyware/stat… Retweeted by Sarah Merritt