Home Latest Hanging Up Their Boots: Fernando and Jenson’s Banter On F1 Retirement! 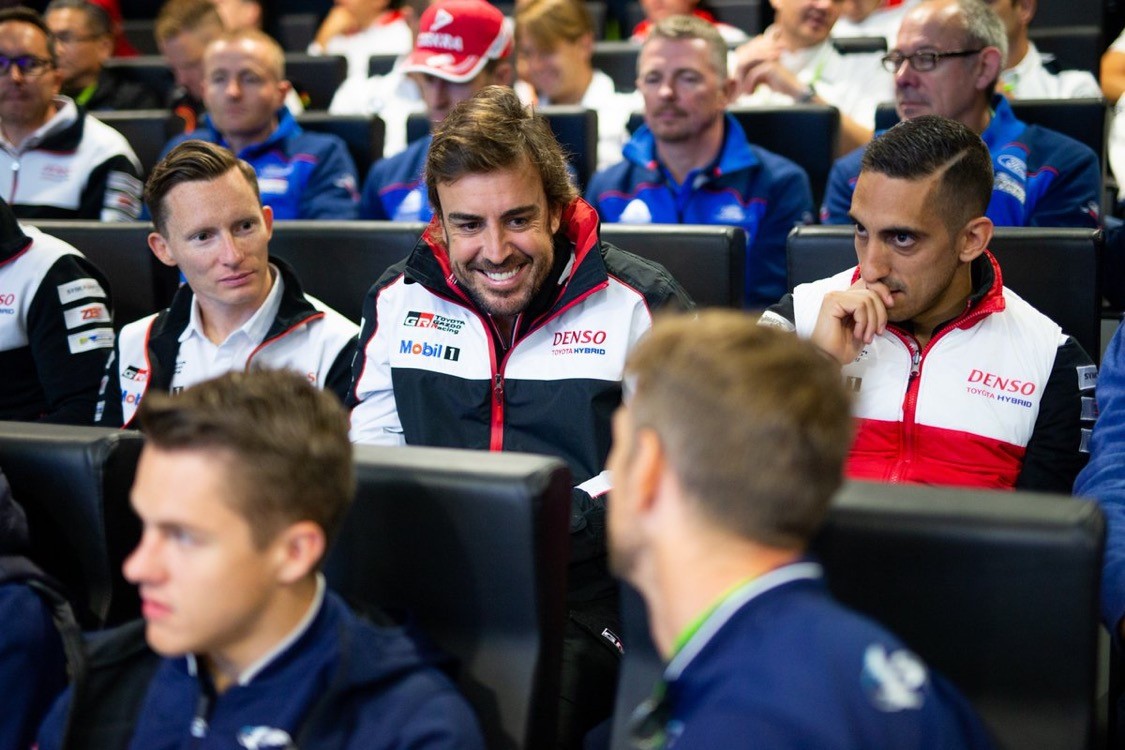 They say there is a story behind every picture, and upon seeing this photo of Fernando Alonso and Jenson Button in a Silverstone press conference tweeted by the official World Endurance Championship account on Friday, one cannot help but smile! It’s to be expected that upon seeing this, many thought to themselves…what are the former teammates saying to one another that has brought such a smile to their faces?

What do you reckon these two World Champions are talking about before the drivers briefing?#6hSilverstone #WEC pic.twitter.com/OEv3Nq5qhC

Being onsite at Silverstone yesterday gave the opportunity to ask both Jenson and Fernando first hand about their conversation and gain some insight into what had perhaps triggered that grin!

“We had talked already a couple of times about ‘how was life?’” said Fernando, smiling. “Every time I saw him, I always asked how is life without F1, and always he answered ‘great, great!’ so now it was time for me to answer that. When we met yesterday, he said to me ‘so how is life now?’ And I said ‘great, you were right!’ It was a funny moment!”

It’s clear from his ever-relaxed approach that the decision is one that Fernando is comfortable with, and one that Jenson definitely thinks is the right one for him. “I said to him that he’s finally made the right decision. He’s woken up and smelled the coffee, as we say” said Button.

He adds “It’s always down to the individual when they choose to leave Formula 1. He’s done the same thing as I chose to do – leave, but leave it open for one year after to go back. I think that is the right option to do, and if the McLaren is quick and it’s winning races, he’ll be back in Formula 1.”

So would Fernando really return to the Woking based team if they were able to turn their fortunes around quickly? Button thinks that is without question if it did arise.

“Every driver in the world would love to be in a winning car in Formula 1. You retire, I think, because you get bored of the travel and the stress of it, and if your results aren’t there, then there’s no reason to be there.”

Button was flattering in his further comments about Alonso’s retirement, but keen to focus on the Spaniard’s successes.

“It is what it is, I don’t really know what to say about it. Discussing his retirement means nothing, it is more his career, which has been exceptional. To win two world championships and to be so close a couple of other times – there aren’t many people who get to do that!”

Talking of their time driving alongside one another, Jenson also revealed Alonso came with a great seal of approval – that of the late John Button.

“We were teammates so I know exactly the strengths and weaknesses of Fernando. It was really, really enjoyable racing against Fernando and being his teammate – my toughest teammate, but I really enjoyed it though and my late father always respected Fernando, and that’s always a good judge of character, and he used to get on very well with my father as well.”

Button predicts plenty more motorsport in Alonso’s future though, and also gave some insight into why he’s back racing in both WEC and Super GT.

“He’s still going to be racing until he’s 95 years old, Fernando. He races at the karting school all the time, driving and teaching. He’s obviously racing in WEC and I think next year, he’ll still have a busy schedule. You can’t stop a racing driver racing, you know. I thought I could stop, but I can’t!”

Retiring from F1 isn’t the end of a racing career at all, as these two are proving. It is just opening the door to other racing series and opportunities to keep competing in the way they know best, and the way we like to see them. Let’s hope that having names such as Alonso and Button on the race card continues to deliver just that, wherever they are racing.